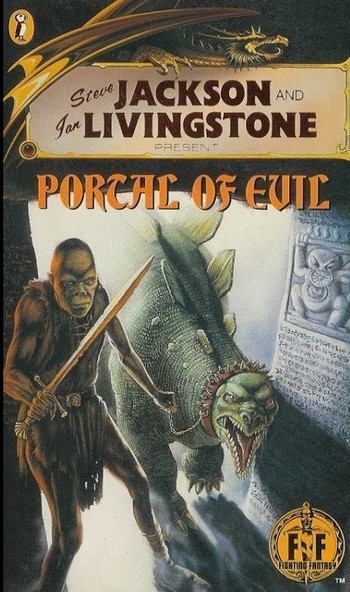 Get him, Fido!
Advertisement:

Portal of Evil is the 37th entry of the Fighting Fantasy series of Gamebooks, written by Peter Darril-Evans.

Between the great Khulian cities of Zagoula and Neuburg, lie the Cloudhigh Mountains and a long stretch of wilderness left untouched by men... until a rich vein of gold was discovered. Soon, the region was overrunned by prospectors, adventurers, rogues and ruffians of sort looking for the precious metal, but something more sinister was unleashed. Miners are vanishing, strange, antedeluvian reptiles have appeared, and the workers are afraid. The rich miner Gloten has promised a rich reward to whoever can solve this nightmare and save his community of Kleinkastel. Having heard of the fabolous reward at stake, you've decided to challenge the mysterious woods and unexplored mountains to find the source of this odd events and put an end to them once and for all.

The book follows the same rules as the standard Fighting Fantasy adventure, but features an highly unusual setting which recalls to mind the Old Western stories, as well as dinosaurs being the main enemies encountered.

Portal of Evil provides examples of: