Attack of the Killer Whatever 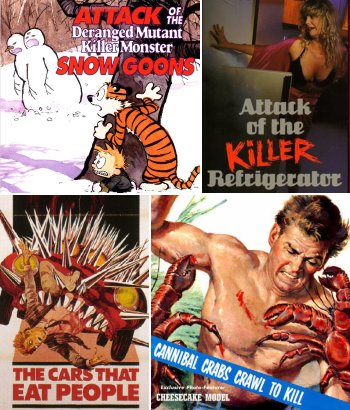 Everything is deadly in fiction!images Clockwise from top left: a Calvin and Hobbes book, Attack of the Killer Refrigerator

, an issue of Man's Conquest

, The Cars That Eat People (US title)
Stephen King: For my 307th book, uh... this couple is attacked by... uh... [looks at a desk] a lamp monster! Oooooooo!
Editor: You're not even trying anymore, are you?
King: [waving a desk lamp] Rawr! Rawr!
Editor: [sigh] When can I have it?
— Family Guy
Advertisement:

At the very least, if there's not a horror movie based around it, there's surely a horror short story or episode of an anthology horror series about it.

A caveat: if it's a killer animal, there's about a 70% chance that it'll also be giant. If it grows too large, it becomes Attack of the 50-Foot Whatever.

Often, the titles of such films will be quite self explanatory, or something simple like a Scary Animal Title.