Film / I Bought a Vampire Motorcycle 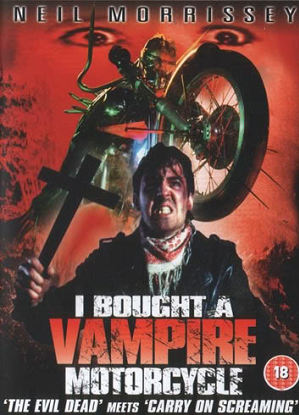 I Bought A Vampire Motorcycle is a British comedy-horror B-Movie from 1990, notable for its unexpectedly good effects, humour, and highly recognisable cast.

Somewhere in The West Midlands, a gang of devil-worshipping outlaw bikers are attacked and massacred in the middle of a ritual by a rival, secular, chapter, led by the psychopathic Roach (Andrew Powell). The demon summoned during the ritual takes advantage of the interruption to possess the dead Satanist leader's classic Norton Commando motorbike.

Some time later, the bike is purchased by amiable motorbike courier Noddy (Neil Morrissey), who is unaware that his purchase is out for revenge on the killers of its summoner, and the blood of everyone who crosses its path. Noddy, his girlfriend Kim (Amanda Noar), a camp vicar (Anthony Daniels), and an increasingly bemused police detective (Michael Elphick) find themselves the only people who can end the bike's reign of terror.