Film / I Come in Peace 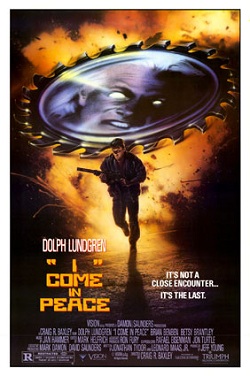 ...But you'll leave in pieces.
Advertisement:

I Come in Peace (1990) (released and known worldwide as Dark Angel) is a science fiction action thriller film about a rule-breaking vice cop who becomes involved in the investigation of a number of mysterious drug-related murders on the streets of Houston, Texas. The film was directed by Craig R Baxley, and stars Dolph Lundgren, Matthias Hues, Brian Benben, Betsy Brantley, and David Aykroyd. Future ESPN college basketball analyst Jay Bilas has a small role as an alien cop.

Jack Caine (Lundgren) is a Houston cop who is determined to wipe out the White Boys, a gang of white-collar drug dealers who killed his partner while Caine was waylaid stopping a convenience store robbery. Little does he know that there is a new drug dealer in town (Matthias Hues), one who preys on heroin addicts in order to get his own drug of trade - made from the endorphins extracted from heroin users. But this guy's home turf isn't in Houston. It isn't even on planet Earth...