Driving Up a Wall 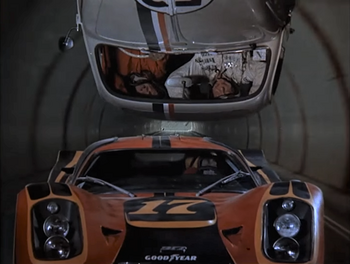 Generally speaking, most cars and other land vehicles are designed to be driven across horizontal surfaces. But when this trope is in play, they will happily drive up walls, and even across ceilings.

There are several possible explanations for this. It could be an inherent property of the vehicle, a power of the driver or passenger, or just good ol' Toon Physics at work.

This may overlap with Achievements in Ignorance and Gravity Is a Harsh Mistress. Not to be confused with "driving someone up the wall" in the sense of making them extremely irritated.