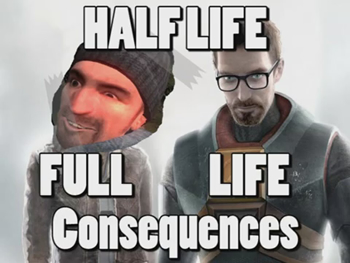 Its a good day to do what has to be done by me and help my brother to defeat the e n e m y s
"It's time for me to live up to my family name and face FULL LIFE CONSEQUENCES!"
— John Freeman
Advertisement:

What began as an innocent fanfiction titled Half-Life: Full Life Consequences (by an allegedly nine-year-old kid with the handle squirrelking) was turned into something great as soon as a YTMND user found it. In mockery, he did a dramatic reading of the story,

and a legend was born.

Naturally, seeing that squirrelking had created other fanfics, most notably in the same storyline, other YTMND users had a crack at the dramatic reading thing. Over time, these narrations were turned into animations,

The first half of the saga tells the story of Gordon Freeman's brother, John Freeman, who rushes from his job to rescue Gordon Freeman in Ravenholdm. The second half, entitled "Hero Beggining", takes place some time later, during which the Combine have succeeded in conquering the human humen race. Henry Freeman takes it upon himself to continue the legacy and lead the resistance against the Combines.

These videos make up the most popular adaptation of the Full Life Consequences saga, each having been featured on numerous gaming websites. They combine dramatic readings performed by other users and music from the album Production Music from Ren & Stimpy, creating a distinct Soundtrack Dissonance. The first video combined the low audio quality of the narration and the upbeat music to create an old-time radio drama feel. Subsequent videos strayed from this design for more straightforward presentation.

Full Life Consequences was sufficiently popular to inspire a Live-Action Adaptation; see the results for yourself.

There was also a few animated adaptations of the first chapter, a Flash animation

one by Vegeta897, and another

by amazingtrout. The latter uses a very similar formula to Djy1991's machinima, and both actually predate it by at least half a year, although you probably wouldn't tell from the Youtube comments.

Solo machinimator Gaz6231 released alternative adaptations of the Hero Beggining chapters several weeks before the Djy1991 versions. They take a very different style than the above adaptations, favoring intentional Narm Charm and increased body animation over jovial mockery and lip movement. Gaz6231 himself describes it as "the Martin Scorsese to their Michael Bay". While the Hero Beggining video is clearly Gaz6231's first work, the Free Man video is much more polished and has earned its own following. Also unlike the Icton Entertainment videos, all animation, editing, and voices are created by one man. There is a bitter dispute as to which series is better, especially in the case of Free Man.

Some also eschewed visual components in favor of providing loads of ham, with this reading

being one such example.

Seaport wrote a "serious" version of the fic, as further

proof of the Fiction Identity Postulate, which can be found here.

Other machinmas and dramatic readings of the various chapters exist, but few of them have the notability of the above authors.

Written by the same person who wrote Halo: Halos in Space, and is, naturally, quite similar. Compare DOOM: Repercussions of Evil. And Peter Chimaera's other fic, Quarter-Life: Halfway To Destruction. Although it may well be a cash in on Full Life Consequences, it is amazing in that he only wrote it after Uncycyclopedia, an online encyclopedia like Wikiped said he was writing it and decided 'Yeh, ok' and the Big Bad's evil plot is to destroy Dallas.

which ties the Quarter Life and Full Life series together. It too, got the machinima treatment.

See also Half Life: Side Story: Gaiden: HUNT DOWN FREE MAN, a Spiritual Successor based on Hunt Down the Freeman.

It eventually turned out to be written by Mattimer, one of the greatest trolls of our time.

The original writings provide examples of:

The machinimas provide examples of:

Example of:
What Measure Is a Non-Human?