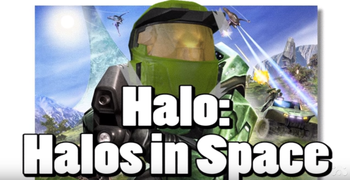 Aliens we are human people and you are aliens but we don't need to kill things like us.
A Halo fanfic by squirrelking starring Joe Chief, who is Master Chief's brother (and who is not a robot and can't fly, unlike Master Chief). In the original fic

, Joe Chief is on a ship one day when he gets attacked by aliens. While he fights them off, more come, along with a flood of water, and he is forced to retreat to the Halo in order to continue the fight against the aliens. It continues in Halo: Halos in Space 2: Aliens attack

, in which Joe Chief fights the aliens on Halo and tries to reach the alien leader. The fic was completed with a one-chapter, ten-word sequel