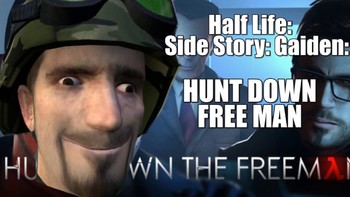 "it is good job to kill for my country but better job to kill for my country FOR MYSELF"
Half Life: Side Story: Gaiden: HUNT DOWN FREE MAN is a Half-Life parody machinima made by DAMN SON on YouTube, loosely based on the infamous Hunt Down the Freeman. It's made in style of Half-Life: Full Life Consequences and similar bad fanfics, and their animated adaptations by djy1991, complete with similar grammar, punctuation, spelling, and adherence to the base material of the former and with hilarious visuals, voiceover and style of the latter (albeit with slightly more visible self-awareness).
Advertisement:

It revolves around a heccu marine named Moint Pan who was sent to black missa "to kill headcrab zombie and scintist and everything else," and most importantly, to "HUNT THE DOWN THE FREE MAN!" Unfortunately, Gordon Freeman quickly defeated him and almost killed him, but he was revived by Gman who made a deal with him to HUNT DOWN FREE MAN on their sake. On his journey, he also meets Adman, "who was spooky mysterious snihper," and quickly befriends him, and together they went on an adventure, facing a boat captain who was "BAD and CHRISTIAN", Combines, and mysterious man who supplied the Combines with an army of clones.

The story is continued in the sequel, titled HUNT DOWN FREE MAN 2 (full title: HALOF LIFE Side Story HUNT DOWN FREE MAN Part More: Moint Pan Is Boss Even I Know!), which happens "ssevanteen years later" after the events of the first part. Moint Pan became the leader of the clone army supplied to him by mysterious man who works for Combines, and now he became the feared pirate who travels across the oceans, terrorizing Combines. However, he learns that Freeman is back, and later he's confronted by the G-Man once again, who reminds him of the deal they made to HUNT DOWN FREE MAN. Moint Pan then continues his quest on pursuit of Freeman, while also learning the true nature of G-Man's deal...

The videos are featured on DAMN SON's channel and can be viewed here:

See also: Half-Life: Full Life Consequences and Quarter-Life: Halfway To Destruction, two fanfics that were made into machinimas by djy1991, which served as a basis for this animation.

Tropes associated with HUNT DOWN FREE MAN and its sequel:

In this parody of the infamous Half-Life fangame Hunt Down the Freeman, Moint Pan announces his plans after defeating Adman. Then Reality Ensues.

In this parody of the infamous Half-Life fangame Hunt Down the Freeman, Moint Pan announces his plans after defeating Adman. Then Reality Ensues.