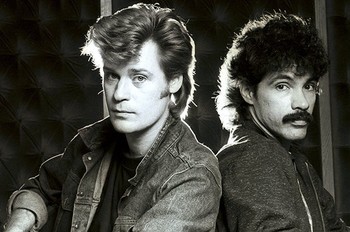 Daryl Hall and John Oates are an American music duo consisting of Daryl Franklin Hohl (born October 11, 1946), also known as Daryl Hall, and John William Oates (born April 7, 1948). They're commonly referred to as "Hall & Oates", but neither of them ever liked that moniker and are adamant on the full name, which may be written with an "and", an ampersand, or even neither at all.

Active since the 1970s, they are known for their unique brand of music, a mixture of Rock and R&B, with hits like "Sara Smile", "Private Eyes", "Out of Touch", "Kiss on My List", "Maneater", "One on One", and their cover of "Family Man". With over 40 million records sold, they are the most popular music duo in history.

Tropes related to their works: