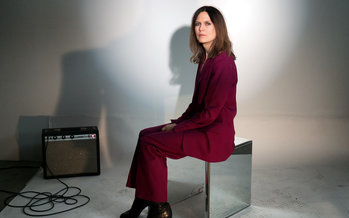 American singer/songwriter/multi-instrumentalist, born 27 July 1967 in Wiscasset, Maine, but raised in Massachusetts. Originally a member of the Blake Babies, going solo in 1992. Subsequently formed the supergroup Some Girls with Heidi Gluck and her sometime Blake Babies colleague Freda Love.
Advertisement:

Her songwriting is often brilliant musically and/or lyrically (though not always both at the same time), much of it with a gloomy edge (she's been compared to a female Morrissey). Despite her long career, she's only had two major hits, "My Sister" and "Spin The Bottle", both from the same album (Become What You Are). Also noted for her friendship (or whatever) with Evan Dando of The Lemonheads.

Ms. Hatfield and her work feature examples of: