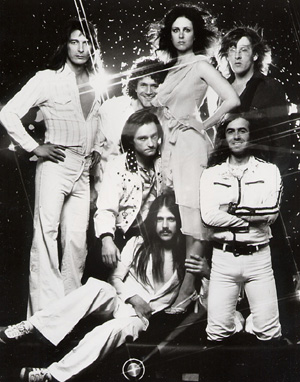 Jefferson Starship (named after the ad-hoc supergroup that played on Paul Kantner's Hugo-nominated science-fiction concept album Blows Against the Empire) is an American Arena Rock band formed in 1974. It is the Spiritual Successor to Jefferson Airplane, which had broken up two years earlier and features Paul Kantner, Grace Slick, David Freiberg, Papa John Creach and John Barbata from the old band (with Marty Balin joining soon after formation). Other founding members include teenage guitarist Craig Chaquico and bassist/guitarist Peter Kaukonen, the brother of Jorma from Jefferson Airplane (Peter Kaukonen was gone after their first tour, replaced by the British Pete Sears). Balin officially rejoined shortly after the release of their debut album Dragon Fly from 1974. Their second album, Red Octopus would become their most successful album, and with a little help from the main single from that album ("Miracles", which hit no.3 in the charts) they became more commercially successful than Jefferson Airplane ever were. However, today they're probably best remembered as, "That band that showed up in The Star Wars Holiday Special".

Importantly, Slick was sacked due to her out-of control alcoholism and a disastrous concert in Hamburg in 1978. Then came the Star Wars Holiday Special, and not long after that, Balin was gone. The following year, lead vocalist Mickey Thomas joined the band and subsequently became the effective leader of the band in the 80's. John Barbata left in 1979 after a car crash, and was first replaced by famous British session drummer Aynsley Dunbar, and then by Donny Baldwin. By 1981, Grace Slick was back, but all of these line-up changes took its toll on the band. Finally, with Paul Kantner's departure in 1984, none of the founding Jefferson Airplane members were left, and that marked the end of Jefferson Starship. Out of the ashes of this band would come Starship.

That's not the end of the story for Jefferson Starship though. Paul Kantner re-formed Jefferson Starship in 1992, and for the first few years they used the name "The Next Generation" next to Jefferson Starship (a reference to Star Trek: The Next Generation). They eventually dropped that, but they remain active today with a revolving-door line-up mainly as a touring act. As Kantner said: 'I'm working on erasing the bad history of Jefferson Starship, in the '80s when it went bad. I had to leave the band, it got so bad. I'm usually the last one at the party, as a general rule'. They released two studio albums (Windows Of Heaven in 1998 and Jefferson's Tree Of Liberty in 2008) and several live albums before Kantner died from multiple organ failure and septic shock following a heart attack in 2016.