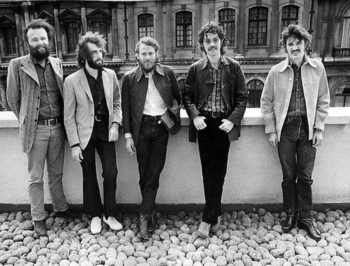 The original lineup consisted of:

Danko, Helm and Manuel all sang lead vocal, sometimes harmonizing and sometimes separately. The Band members were also (apart from Robertson, who mainly concentrated on guitar) accomplished multi-instrumentalists, trading roles as needed from song to song. Manuel and Robertson shared songwriting duties in the early years, but as time went on Robertson took over as principal songwriter (a subject of controversy—see below).

The Band first came together as "The Hawks", the backup band for rockabilly singer Ronnie Hawkins. Hawkins was born in Arkansas but found success touring Canada, and he hired the members of The Hawks one at a time between 1958 and 1963. Hawkins brought Helm, a fellow Arkansan, north to Canada to tour with him; the others were all from Ontario, being local recruits by Hawkins on his Canadian tour.

The Hawks left Hawkins in 1963 and struck out on their own, touring Canada as Levon and The Hawks and other names. Their big break came when Bob Dylan hired them to be his touring band for a series of concerts in 1965 and 1966. This was Dylan's first tour since transitioning from folk music to electric rock. Fans of Dylan's folk music reacted so badly to the change that Levon Helm, disturbed by the negative reception, quit the group and went home.

After touring on their own for a while, The Hawks—minus Helm—rejoined Dylan at his rural retreat in Woodstock, New York in the fall of 1967. Danko, Manuel and Hudson rented a pink-colored house (subsequently nicknamed "Big Pink") in nearby Saugerties, and together with Robertson and Dylan began making a series of demo recordings in its basement. A number of the songs from these informal sessions circulated for years on very popular bootlegs before finally being officially released in 1975 as The Basement Tapes. Soon the group started recording their own songs as well. It was at Woodstock that they settled on the name "The Band". They had stopped being known as The Hawks and the record company nixed the idea of the "The Crackers" (as in "white guys"), and after years of playing as "the band" for singers such as Hawkins and Dylan, they went with that as their official name.

In 1968, with Helm back in the fold, they went into the studio and recorded their debut album, Music from Big Pink. It did not sell particularly well—The Band were never a chart-topping act—but the group's roots rock / Americana sound proved highly influential. "The Weight", a Robbie Robertson song on the album, was included in the soundtrack for Easy Rider and became one of the group's most famous songs; it is now a roots rock/Americana/country-folk standard. In 1969 they played at the famous Woodstock music festival and accompanied Dylan at the Isle of Wight Festival in the UK. That same year their followup album, titled The Band, cracked the top ten and raised The Band's profile. "Up on Cripple Creek" became a minor hit single, while "The Night They Drove Old Dixie Down" would become a hit cover song for Joan Baez a few years later and remains another of The Band's best known songs.

Stage Fright appeared in 1970 and also reached the top ten. It was during this time that Robbie Robertson began to take over as principal songwriter; Music from Big Pink had featured equal songwriting contributions from Manuel and Robertson as well as other songs written by Danko and Dylan, and Manuel and Helm had contributed songs for The Band, but Manuel eventually dried up as a source of original music as he fell into alcoholism and Danko, Hudson, and Helm never had been prolific writers, so the composing duties consequently devolved to Robertson. Later there would be a great deal of dissension over this. Helm engaged in a long and bitter feud with Robertson in which he charged that Robertson had stolen songwriting credits from him and other members of The Band. Robertson denied taking any credits he wasn't due, and in 2008 his daughter wrote a letter to the editor

of the Los Angeles Times noting that Helm still wasn't writing his own material. The feud continued until Helm's death in 2012.

The Band released Cahoots in 1971; this record received less favorable reviews than their previous efforts. The Band then went four years without recording an original album as acrimony within the group increased. Instead they released the concert album Rock of Ages in 1972 to critical acclaim and commercial success. Next came a cover album, Moondog Matinee, in 1973. That same year The Band played the "Summer Jam at Watkins Glen" music festival along with The Allman Brothers Band and The Grateful Dead in front of over 600,000 fans. They also reunited with Bob Dylan, providing the instrumental backing on his Planet Waves album and then joining him for another tour, which yielded the concert album Before the Flood in 1974. Next came Northern Lights - Southern Cross in 1975. It was The Band's first album of original material in four years, and the only one for which Robertson was the sole composer. It drew critical praise but did not sell well.

In 1976 Robertson, who had grown tired of touring, convinced the rest of The Band to retire from live performances. The idea grew into a farewell concert in which The Band would play along with other artists that they admired and had influenced them. That idea further developed into a feature film of the concert, to be made by hot young Hollywood director Martin Scorsese. The concert, called The Last Waltz and held in San Francisco on Thanksgiving night 1976, featured the Band playing their own music as well as playing alongside guests that included Dylan, Hawkins, Joni Mitchell, Neil Diamond, Neil Young, Muddy Waters, Eric Clapton, and Van Morrison among others. The Last Waltz album was released in 1978 along with Scorsese's film of the same name. It has been regarded ever since as one of the best concert films ever made. Levon Helm was embittered by the experience, however, charging that Robertson pushed the whole project in an effort to launch himself into a movie career, and that Robertson manipulated his good friend Scorsese into presenting Robertson as the frontman of the band. (The film does indeed include quite a bit more commentary, and in-concert camera time, from Robertson than from any of the other Band members.)

It seemed that the plan was then for The Band to keep making records as a studio-only outfit, a la The Beatles in the late '60s. (In 1977 they released Islands, a collection of B-sides and leftovers meant to get them out of a record contract.) However, for various reasons—including the aforementioned intra-band fallout over The Last Waltz—this didn't happen, and after 1978 the original lineup never played together again. Robertson never returned to the group, instead releasing a few solo albums (his song "Broken Arrow" became a big hit for Rod Stewart) but spending most of the rest of his career as a film soundtrack composer, including a long professional relationship with Martin Scorsese as music composer and arranger for Scorsese's films.

The Band re-formed in 1983 with Jim Weider on guitar in place of Robertson. However, seven years out of the public eye (and possibly Robertson's absence) led to the group playing considerably smaller venues than they had in their glory days. In March of 1986 Richard Manuel hanged himself in his hotel room after The Band played a show at the Cheek to Cheek Lounge in Winter Park, Florida. He had relapsed into severe alcoholism as well as cocaine use following a period of sobriety in the early 1980s. The Band continued to play with other musicians replacing Manuel. In 1990 they played at a concert in Berlin along with other acts to commemorate the fall of the Berlin Wall. In 1994 Danko and Hudson performed with Robbie Robertson when The Band was inducted into the Rock and Roll Hall of Fame; Helm, still feuding with Robertson, did not attend.

The Band (now comprised of Danko, Helm, Hudson and Weider along with drummer Randy Ciarlante and keyboardist Richard Bell) released three new albums in the 1990s, their first original material in twenty years. However, The Band finally ended for good when Rick Danko died of a heart attack in 1999. Hudson and Helm continued to record and perform. Helm won a battle with throat cancer that almost cost him his voice, then triumphantly returned from illness with the Grammy-winning albums Dirt Farmer and Electric Dirt, before a recurrence of the cancer led to his death in April of 2012.