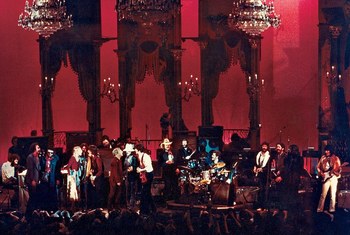 THIS FILM SHOULD BE PLAYED LOUD!
Advertisement:

The Last Waltz is a 1978 film directed by Martin Scorsese, documenting the last live concert performance of the original lineup of The Band.

After 16 years as a touring group, The Band decided to retire from touring and live performance. The Band—bass player/singer Rick Danko, drummer/singer Levon Helm, keyboardist/saxophone player Garth Hudson, pianist/singer Richard Manuel, and guitarist Robbie Robertson—elected to play a final farewell concert on Thanksgiving night, November 25, 1976, at the Winterland Ballroom in San Francisco. This idea then grew to be a bigger show in which The Band would invite as their Special Guests other performers whom they regarded as influences, had worked with in the past, or just held in high esteem. They assembled one hell of an All-Star Cast to appear onstage: Ronnie Hawkins, Dr. John, Muddy Waters, Eric Clapton, Joni Mitchell, Neil Young, Van Morrison, Bob Dylan (of course), Neil Diamond—yup, Neil Diamond—and others, each of whom performed songs of their own with The Band accompanying them.

The idea then further grew into capturing the show into a concert film to be directed by none other than Robertson's friend Martin Scorsese, then one of the hottest young directors in Hollywood. While most concert films prior to 1976 had been no-frills filmed performances on 16mm, Scorsese elected to stage the film as a full-on Hollywood production, shooting in 35mm with seven cameras, with specially designed lighting for specific songs, storyboarding, and set design. Scorsese also had The Band perform two songs on a film soundstage: their Signature Song "The Weight" (along with The Staple Singers), and new song "Evangeline" (with Emmylou Harris). He also included in the movie interview segments in which he talked about the members of The Band about their history and the decision to quit touring.

The result is still regarded as one of the best concert films ever made. It has, however, attracted criticism. Levon Helm, who until his death in 2012 carried on a bitter feud with Robertson about songwriting credits and royalties, stated that it was Robertson himself who unilaterally decided to quit touring. Helm charged that the film was Robertson's attempt to paint himself as the Face of the Band and launch himself into a film career. (If so this was ironic, as this film launched Levon Helm to the more successful acting career, including as narrator of The Right Stuff and a starring role in Coal Miner's Daughter.) Helm also claimed that Robertson, who rarely sang despite writing most of The Band's material due to his poor voice, was singing into a dead microphone on stage.

Random trivia: note Neil Young's wild-eyed, goofy smile when he comes back on stage for the finale. Young had been snorting quite a bit of cocaine backstage, and came out with a distinctly visible coke-encrusted booger under his nose. The coke booger was removed in post-production.

"The Tropes were our school. They gave us a sense of survival.":