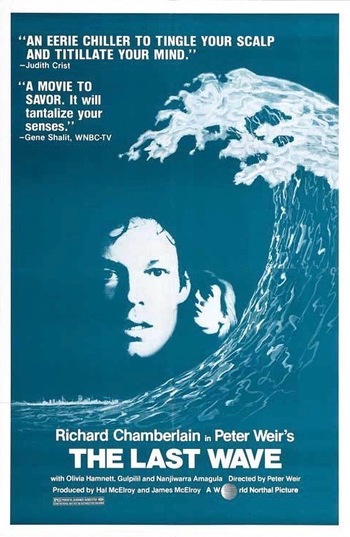 The Last Wave (released in the U.S. as Black Rain) is a 1977 Australian mystery/thriller film by Peter Weir.

The movie starts with the weather in Australia taking a sudden, unexplicable turn for the worse: the cities and villages are literally drowning in the rainwater, giant blocks of ice and snow are falling from the sky, the rain suddenly turns black. The weather conditions in the rest of the world are no better. Experts blame everything on the pollution.

Meanwhile, in Sydney, a white lawyer named David Burton (Richard Chamberlain) is called to help investigate the case of homicide that happened in the Aboriginal community. It seems like a fairly usual case at first. But why is the cause of death so difficult to explain? Why does David keeps seeing one of the suspects in his dreams? What is that strange symbol that keeps appearing along with him? There cannot be magic involved... can there? Before you know, the world around David and his personal life plunge to hell.

This film, along with The Cars That Ate Paris and Picnic at Hanging Rock, is part of Weir's Early Installment Weirdness period. It deals with many themes, such as: the difference between the world and worldview of the white Australians (and, by extention, modern Westerners) and those of Aboriginal Australian people (and, by extention, the traditional, so-called primitive, societies), the reaction of humans to natural cataclysms, mythology, the unknown and the indifference of nature towards her creations.

The Last Wave provides examples of the following tropes: