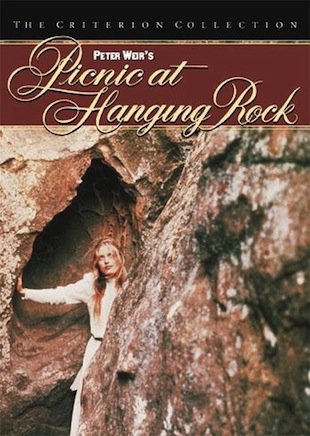 "What we see and what we seem are but a dream. A dream within a dream"
Advertisement:

A 1975 Australian mystery/drama film by Peter Weir of the Australian New Wave. It is a film adaptation of Joan Lindsay's 1967 novel Picnic at Hanging Rock.

It tells the story of an ill-fated outing undertaken by Australian girls enrolled at an exclusive finishing school. The students of Appleyard College are permitted to spend Valentine's Day 1900 at Hanging Rock (an actual geological formation in the countryside northwest of Melbourne), collecting information for an essay to be written upon their return. After being granted permission by their French mistress, four girls — Miranda, Marion, Irma and Edith — set off to explore the upper slopes of the rock. Wandering through the maze-like tunnels, Edith discovers that the others appear to have fallen into a trance; the trio have, as one, removed their shoes and stockings, and proceed to drift into another narrow passage. Fearful, Edith runs back to get help. Mathematics teacher Miss McCraw heads up to fetch them, however, teacher and students disappear without a trace. The remainder of the story deals with a not-very-successful police investigation into the matter, turmoil at the school in its aftermath, and two young men who were also at Hanging Rock that day, who become entangled in the tale: English aristocrat Michael and his Australian valet Albert.

The film features visually hypnotic photography by Oscar winner Russel Boyd and a haunting score by Bruce Smeaton (featuring the playing of the "Master of the Pan Flute", Gheorghe Zamfir), and established Weir as a major international talent. It was also massively popular in its home country, finishing as the third highest-grossing film of 1975 at the Australian box office (behind Jaws and The Towering Inferno).

In 2018 a miniseries adaptation of the book was released, starring Natalie Dormer as Mrs. Appleyard.