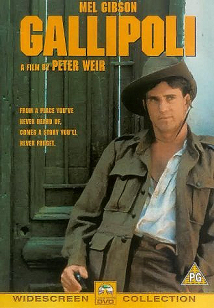 Gallipoli was the birth of a nation. It was the shattering of a dream for Australia. They had banded together to fight the Hun and died by the thousands in a dirty little trench war.
— Mel Gibson.
Advertisement:

Gallipoli is a 1981 Australian film directed by Peter Weir, set during World War I and focuses on the failure that was the Gallipoli landings. Well, there's a bit more to it than that. The film completely avoids glorifying war by showing how boring it can be - from slow moving training, to months at sea, to the endless waiting before battle.

The movie follows a young man, Archy (Mark Lee) with an incredible talent for running who lives in the outback. He dreams of going off to the city or joining the army to fight in a far off country. But he's too young and his parents and running coach say no. Archy heads off to an athletics carnival where he beats another man - Frank Dunne (Mel Gibson) - and they become friends. After a bit of dilly-dallying and good old fashioned Aussie fun, they decide to go down to the city where no one knows them, and enlist in the army. They hop a freight train but get kicked off and have to walk across the desert, which nearly kills them.

Archy and Frank get accepted into the army, but Archy is accepted into the Light Horse Brigade (due to his bitching riding skills) and Frank becomes an infantry man. They are sent to Egypt on separate troopships but meet up again in Cairo. They spend a few months training, having sex education classes, frequenting brothels and stealing from market stalls.

Frank transfers into the Light Horse Brigade, as they're being sent to Gallipoli in Turkey, where they don't need horses. They arrive at Anzac Cove and for the next few days experience the boredom that is trench warfare. They hear about other injured infantrymen who are slaughtered at the Battle of Lone Pine and work as runners for the higher-ups, carrying messages from the British generals to the Australian leaders when the phone lines are down. Which is often.

Archy and Frank's platoon is ordered to take part in the Charge of the Nek, which is to distract the Turks from the British landing at nearby Suvla Bay. However, Archy is asked to run a message for their commander, but he asks Frank to do it. And off Frank runs, along the many miles to the British command.

The plan is that the 8th and 10th Light Horse Brigades will charge in three waves, over land held by Turkish Machine Gunners, Archy being in the last wave of men. The first wave will be at 4.30 AM, after the Brits bombard the Turks to give the Australians the best possible chance of making it across. The Commanders watches are unsynchronized and the bombardment ends far too early. The first wave is ordered to go over the top with the Turk gunners ready and waiting for them. They're cut down and the second wave goes over the top, barely making it 10 metres. Meanwhile, Frank is told that they've rethought the attack, but the phone lines are down and there is no way for them to tell the Australians to stop. So he must run all the way back to the trenches and stop the third wave.

The Australian commander is also rethinking the attack but has his previous orders to push on. Archy and his friends pin their medals, photos, letters and diaries to the trench wall, gather their rifles and prepare to run to their death. The order comes and they go over the top, Frank arriving just after they run out into No Mans Land, where he lets out a scream of anguish.

The film ends with Archy losing his rifle and running as hard as he can toward the Turkish trenches, until he is shot in the chest. Roll credits.