Film / The Year of Living Dangerously 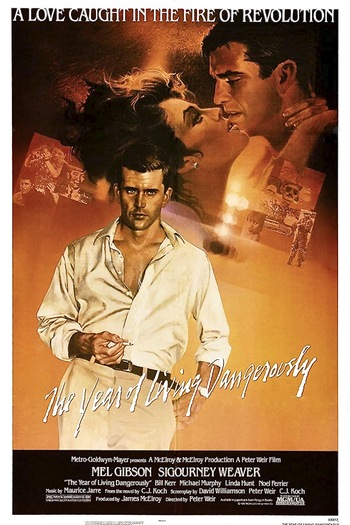 A 1982 romantic drama film adapted from the 1978 novel of the same name by C.J. Koch, directed by Peter Weir and starring Mel Gibson, Sigourney Weaver, Bill Kerr, Michael Murphy, and Linda Hunt. It's notable as one of the first film co-productions between the US and Australia, as Metro-Goldwyn-Mayer funded the entire production after the South Australian Film Corporation backed out from its involvement.

Set in 1965 Indonesia, the film tells the story of a romance between an ambitious Australian reporter and a beautiful, sophisticated British diplomat at a time of unrest and revolution. Linda Hunt gives an amazing, gender-bending performance as the half-Australian, half-Chinese dwarf photographer Billy Kwan.