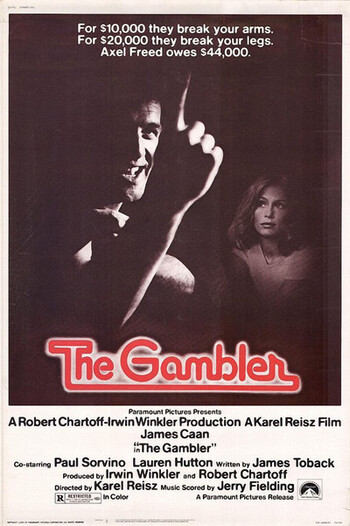 The Gambler is a 1974 American film directed by Czech-British Karel Reisz from a script by James Toback. James Caan, Lauren Hutton, Paul Sorvino, and Jacqueline Brookes lead the cast.

Axel Freed (Caan) is a literature professor, engaging and popular with his students. He is also an out-of-control gambling addict. At the start of the film he has a spectacularly bad night at the craps tables, enough for affable bookie Hips (Sorvino) to be concerned. He goes to his doctor mother (Brookes) for help, and she reluctantly fronts him enough money to get out of trouble. He takes his girlfriend Billie (Hutton) to Las Vegas to build on his fortune. After what initially seems to be a hot night for him, his luck goes bad again and he once more lacks the money to pay off his debt. While he hopes that his grandfather (Morris Carnovsky) will bail him out, the chief loan shark (Vic Tayback) informs him that the old man has already refused. That leaves him with basketball star Spencer (Carl W. Crudup) as his last hope.

Toback’s screenplay is officially original, but bears resemblance to a story of the same name by Fyodor Dostoevsky, and Dostoevsky’s work is discussed in Axel’s class.

Tropes present in The Gambler: