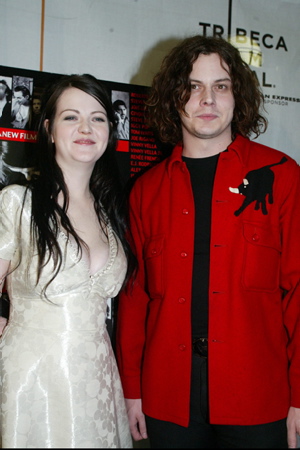 "Hi, I'm Jack, and this is my sister Meg."
Advertisement:

The White Stripes were an Alternative Rock duo consisting of Jack and Meg White. They were founded in Oak Park, Michigan (one of Detroit's smaller northern suburbs) in 1997. In the band's lifetime they released six albums (and a few live albums):

The height of their popularity would likely be in 2007-08, around the release of the single "Icky Thump" (their only US Top 40 hit, something they achieved without bothering with pop radio airplay), though the 2003 release of the single "Seven Nation Army" (which reached #1 on the Billboard Modern Rock chart without crossing over) was a previous peak. In February 2011, in a statement on the band's website

, it was announced that the band had disbanded after 14 years of existence.

Jack has gone on to a successful career in his own right, opening Third Man Studios in Nashville, TN, releasing a solo album in 2012 and running two other bands in the process.

Jack and Meg were married before founding the band, and now consider each other siblings. Both have since married and divorced other people.

Tropes found in their stage personas: