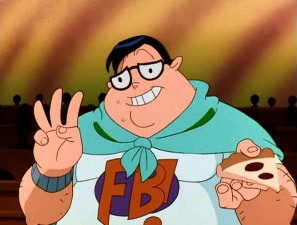 Don't worry, it's not always this bad.
"It's true that it is always the winners that write history. But it is the losers that do the Transformers Wikipedia entry."
— Starscream

The term used for obsessive fans of a particular activity that goes a bit too far onto the creepy side. Unlike fangirls (which usually refers to women obsessed with characters and their relationships with either other characters or themselves to the exclusion of the rest of the elements of the canon), the term "fanboy" is usually reserved for antisocial people with a self-inflated ego over their knowledge and/or mastery of the topic in question, often parading it around and belittling those around him. They are to fandoms what Stop Having Fun, Guys are to tournament rules. Other times, the term is used to describe people who overzealously defend the perceived objective quality of the object of their obsession.

In Japanese, the term Otaku is synonymous with this, but implies an almost stalker-like attitude as well. The original (very pejorative) meaning got lost when it was adopted by English-language fans of Anime.