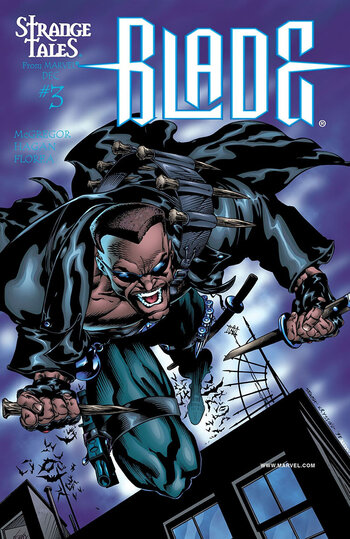 The cover to Blade vol 2 #3.
They call me... Blade! Blade — The Vampire Killer!!
Tomb of Dracula #10, Blade's first appearance
Advertisement:

Blade made regular appearances again during the Midnight Sons story arc in the 1990s, which led to the character being featured on the then running Spider-Man cartoon, which gave Blade new powers. That led to a mildly successful trilogy of movies based off the cartoon, best known for building enough confidence for Marvel to launch films of better named properties like X-Men and Spider-Man. Attempts to reproduce that success for Blade in the comics failed but the adaptations did permanently change how the character would be used.

The Marvel Comics character of Blade has had four self-titled comic books so far:

Blade Vol 1 (1998) was a one-shot written by Christopher Golden, with art by Gene Colan. It concerned Blade fighting against Deacon Frost, who was trying to take over as Lord of the Vampires from Dracula. It also includes Hannibal King, Safron Caulder, and Brother Voodoo.

Blade Vol 2 (1998–1999) was a three-issue mini-series written by Don McGregor, with art by Brian Hagen. It concerns Dominique Levant, a woman living in New Orleans who hires Blade to do a job. Things get complicated with the addition of Morbius the Living Vampire.

Blade Vol 3 (2002) was a six-issue Marvel MAX mini-series written by Christopher Hinz, with art by Steve Pugh. It concerns the Tryk, a new kind of vampiric creature that Blade encounters. The Tryk are fearless of vampires and actively hunt them, as well as the Seven, the Ancient Conspiracy that keeps the Tryk's numbers low.

Blade Vol 4 (2006–2007) was a twelve-issue series written by Marc Guggenheim, with art by Howard Chaykin. It follows a more case of the week structure, but it has the recurring antagonist of Lucas Cross, Blade's long-lost father, who is attempting to use his son to fulfill a prophecy.

See Blade for the character himself.