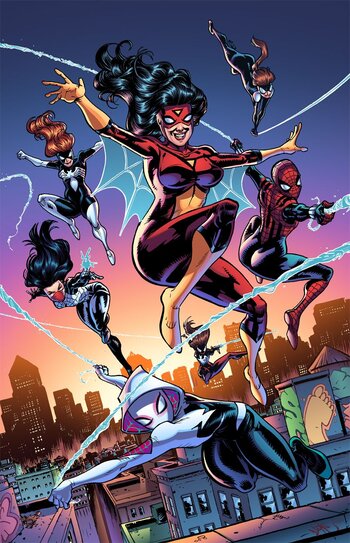 Does whatever a Spider-Man can!note Pictured from left to right: Silk (Cindy Moon), Julia Carpenter, Jessica Drew, and Mattie Franklin. Above Jessica is Spider-Girl (Anya Corazón), below Jessica is Earth-1610/Ultimate Universe Jessica Drew, and Ghost-Spider (Earth-65 Gwen Stacy, formerly Spider-Woman)
Spider-Man: I didn't say you could lend [the name] out. There's, like, ten of you now.
Spider-Woman (Jessica Drew): There's three, and they are ripping me off.
— New Avengers
Advertisement:

Compared to other Distaff Counterparts, Spider-Women are rarely an accurate one for Spidey. Most of the time, they possess a set of unique abilities on their own, instead of web-shooters. They also form a small form of Legacy Character pool (while not exactly a big one like Venom or Robin), and occasionally, each form possesses different names, including even Spider-Girl. Although the Spider-Girl in question is NEVER any of the Alternate Universe versions of the original Spider-Man's daughter, with one of them taking the Spider-Woman name later in her career.