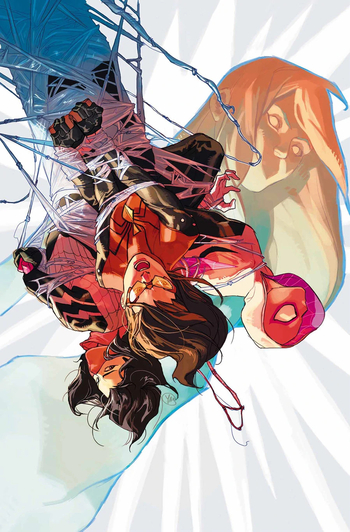 Spider-Women is a 2016 Bat Family Crossover published by Marvel Comics, starring its three titular Spider-Women: Spider-Woman, Spider-Gwen, and Silk, set not much longer after 2014's massive Spider-Verse crossover where they all initially met.

Jessica Drew, Cindy Moon, and Gwen Stacy are enjoying a girls' day out in the latter's native Earth-65 when their plans hit a snag: Gwen's interdimensional travel device is stolen during a staged supervillain attack, effectively trapping Jessica and Cindy there with her.

Together, they must find a way back to Earth-616, while also uncovering a conspiracy involving villainous organization S.I.L.K. — and the very familiar person in charge of it.

In December 2018, it was announced that an animated film based on this storyline would be produced as a spinoff of Spider-Man: Into the Spider-Verse, which features Gwen as a supporting character.