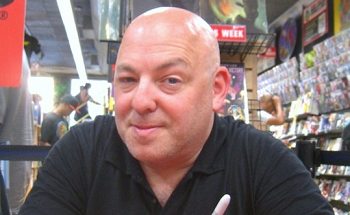 Brian Michael Bendis (born August 18, 1967) is a American comic book writer. He started writing crime/noir independent comics, in Caliber and Image Comics, and then joined Marvel Comics. Marvel had a project to relaunch its characters in a new universe, the Ultimate Marvel universe, and to make it feel fresh they hired new writers with new styles, such as Bendis and Mark Millar, instead of using the established ones. Bendis started in 2000 with Ultimate Spider-Man, a Decompressed Comic starred by a teenager Peter Parker, that started with his Origin Story and reconstructed all the Spider-man mythos from scratch. He also wrote Ultimate Marvel Team-Up, making team-ups of Spider-Man and other reimagined characters, to provide further Worldbuilding. Bendis and Millar, who had started Ultimate X-Men and The Ultimates (a remake of The Avengers), joined forces to relaunch another classic Marvel team in Ultimate Fantastic Four.

The success of the Ultimate comics led to Marvel using Bendis at comics set in the mainstream universe as well. In 2001 he wrote Daredevil for the Marvel Knights line. He also started the Marvel MAX line, and his first comic would be a relaunch of Spider-Woman (Jessica Drew, a 1970s characters that got the Chuck Cunningham Syndrome) turned into a private investigator, but Marvel had plans to make a standard relaunch of the character. So Bendis changed some details of his new comic, and introduced it as a completely new character instead: Jessica Jones. Jessica Jones started in the comic book Alias, and then continued in The Pulse.

He also made a complete revamp of The Avengers, a team with Loads and Loads of Characters at the time. He closed that period of the team with Avengers Disassembled, and then relaunched it as the New Avengers. This team had a smaller cast, including Marvel's flagship characters Spider-Man (who had only been in the Avengers for small times in the past) and Wolverine (who had never been a member). He also included Spider-Woman, and also Luke Cage, another forgotten character of the 1970s that he also brought back to the spotlight. Shortly after he wrote House of M, a Crisis Crossover that removed the powers of a big number of mutants, a storyline that impacted the X-Men comics for years. The New Avengers disbanded in Civil War, divided about signing a Super Registration Act or not. From then on, Bendis wrote two comics: "New Avengers" with a new team that did not sign the act, and Mighty Avengers with those that did. He wrote a new crossover, Secret Invasion, and Iron Man was removed as head honcho of SHIELD and replaced by the villain Norman Osbourne. "Mighty Avengers" was closed and replaced by Dark Avengers, a team of villains posing as heroes. The whole arc ended in Siege.

The X-Men arcs started by House of M concluded in Avengers vs. X-Men, and Cyclops kills Charles Xavier at the end of that story. This kickstarted the events of All-New X-Men, Bendis' run with the X-Men, where the original team (the teenagers Cyclops, Jean Grey, Beast, Angel and Iceman) are time-displaced to the modern day. He also scripted the X-Men Bat Family Crossover Battle of the Atom. This comic also made crossovers with Ultimate Spider-Man and Guardians of the Galaxy, that he was also writing.

Speaking of that... remember Ultimate Spider-Man? Bendis kept writing it all this time, and even achieved with Mark Bagley the record of the longest writer-artist collaboration in a Comic Book Run, previously held by Stan Lee and Jack Kirby in Fantastic Four. At one point, he made a huge change to the book: Peter Parker died and a new guy, Miles Morales, became the new Spider-Man. It was not a character from the existing cast but a completely new one, with his own set of secondary characters. The Milestone Celebration for the 50th year of Spider-Man was celebrated with Spider-Men, a crossover between the regular Spider-Man from the Marvel Universe and Miles Morales. Morales was one of the most popular characters of the whole Ultimate Marvel universe, to the point that Secret Wars (2015), the crossover that ended it after 15 years, transferred him and his cast to the regular Marvel universe. Bendis wrote a pair of tie-ins for this event, Ultimate End and Old Man Logan (2015). He then continued working with Miles, now in the Marvel universe, in Spider-Man (2016). One his last stories in Marvel was Spider-Men II, which revealed that the Ultimate Universe has been brought back to existence at some point off-panel.

After Secret Wars, he worked with Iron Man. His run soon led to another crossover, Civil War II, where Iron Man died. He introduced a Legacy Character, Riri Williams as Ironheart, and also Dr. Doom of all people took the identity in Infamous Iron Man (he has a Heel–Face Turn after Secret Wars). Tony Stark eventually returned, and Iron Man #600 was Bendis' last comic for Marvel.

In 2017, he became an exclusive DC Comics creator, leaving Marvel after 17 years, where he would chart the course of the Superman (Brian Michael Bendis) comics for the next three years, as well as develop the Wonder Comics line for DC, which included Bendis having stints on relaunches of Young Justice and a new character called Naomi. In 2019, Bendis was given a reboot of the Legion of Super-Heroes which lasted 12 issues before DC Future State revealed an overhaul of the book to come. As part of DC Infinite Frontier, Bendis began writing the main Justice League series.

Comics and series written by this author include: