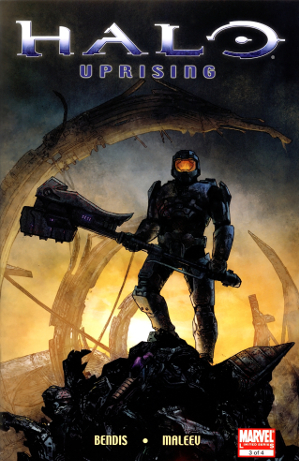 Halo: Uprising is a four-issue comic book set in the Halo universe and published by Marvel Comics. It was written by Brian Michael Bendis and takes place between Halo 2 and Halo 3.

The Covenant are invading Earth and have captured Colonel James Ackerson, a long time rival of Dr. Halsey and the SPARTAN-II Program. Under torture he reveals to them that there is a Forerunner treasure in Cleveland, the Key of Osanalan, that the Covenant need to activate the Halos. Living there is a lowly hotel concierge, Ruwan, who is caught in the middle of the Covenant attack on the city. He teams up with a random passerby, the musician Myras Tyla, and they struggle to escape before the Covenant kill them. But as they discover that the Covenant are holding back so as to discover the mysterious key, Ruwan starts to suspect he knows what it is...

The comic also co-stars the Master Chief, who is aboard the Forerunner Dreadnought and fighting the hordes of Covenant in there, all while hunting the Prophet of Truth.

While all four issues were originally supposed to have been published in 2007 for the release of Halo 3, numerous delays resulted in the series not being finished until 2009.