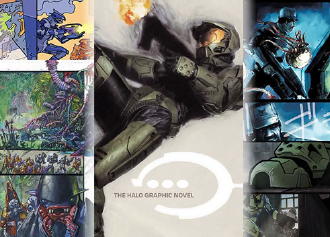 The Halo Graphic Novel is a 2006 graphic novel published by Marvel Comics in partnership with Bungie Studios. Totaling 128 pages, the graphic novel covers four supplementary stories set in the Halo universe, with art by Simon Bisley, W. Andrew Robinson, Tsutomu Nihei (creator of Blame and Knights of Sidonia), and even the retired Moebius, who contributed because of his son's fondness of the games.

In the first story The Last Voyage of the Infinite Succor (set just after the sixth mission in Halo: Combat Evolved), Elite Special Operations Commander Rtas 'Vadumee and his team respond to a distress call and board the crippled supply craft Infinite Succor, which the Covenant believe has been attacked by humans. The only crew member still alive, a Covenant Prophet, tells 'Vadumee that the Succor has been infested by the Flood. Stuck on the ship, the Flood intend to activate the Succor's slipspace drive to escape the star system and find new planets to infect. Fighting waves of Flood, including the reanimated remains of his fallen soldiers, 'Vadumee plots a slipspace course that will destroy both the Succor and the Flood aboard it, then escapes via a Covenant shuttle.

The second story Armor Testing (set shortly prior to the events of Halo 2) involves the UNSC field-testing a new version of the MJOLNIR Powered Armor, the Mark VI, in a series of challenging exercises. A lone Spartan-II puts the armor through its paces by dropping from Earth's atmosphere and engaging in a mock battle against UNSC special forces. This Spartan is revealed to be a woman, Maria-062, who has come out of retirement as a special favor to test the new equipment before it is sent to the Master Chief.

The third story Breaking Quarantine (also set just around Combat Evolved's sixth mission) follows Sgt. Johnson in his escape from the Flood infestation on Halo. No dialogue is included in this story, as the focus is on building atmosphere, with the only written words being sound effects and the like.

The final story of the compilation is Second Sunrise over New Mombasa, a story detailing the attack on New Mombasa, Kenya just before the Master Chief arrives there in Halo 2. The plot follows a reporter who creates propaganda for the UNSC. When the Covenant invade the city, the reporter and fellow citizens take to its defense, until they are forced to flee as the city faces ruin.

The book finishes with a section titled "Gallery Art", featuring a range of standalone artwork from various Bungie, Marvel and independent artists. Hidden away in this section is a secret fifth story known among fans as Page 122, a single-page collage of various documents related to a secretive mission Sergeant Johnson took during his time in Project: ORION.