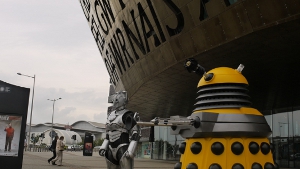 Who said that monsters couldn't appear in Cardiff?
Stan Rosado: Let's go alien for a second. Why here? Why Ohio?
Casey Connor: Cause if you were going to take over the world, would you blow up the White House Independence Day style... or sneak in through the backdoor?
— The Faculty
Advertisement:

Looking for a place to set the disaster of the week/alien invasion/supervillain's base/origin of the bad guys/home of the heroes etc? Well, you can use the classics: New York, Tokyo, London or Paris for the first three, places like Russia, North Korea or the Middle East for the other two, or Los Angeles or (again) New York for the last one. Of course, you may think that's too cliché. Another alternative is having the plot take place in a generic Everytown, America or a fictional town in the middle of nowhere, and have the villains come from some equally-fictional Ruritania or Banana Republic. Or you may Take a Third Option. Have the center of the plot be in an actual place, but some relatively harmless semi-known non-exotic location which makes you ask "Why THERE, of all places?" That is the basis of the trope.

Are aliens landing in UFOs? They'll land in Johannesburg, South Africa. Is there a neighborhood full of world-class martial artists with superhuman powers? It's in Luxembourg. Is there a Hellmouth opening? It's opening in Singapore. Is there a magical gateway between worlds? It's in the Midwest (one of them in Cleveland). Is there a mysterious gigantic cavern hidden just beneath the earth's surface, wherein aliens once upon a time created all life on earth? It's underneath Sugarloaf Mountain. Is there a huge, creepy castle home to a ruthless villain who wants to conquer the universe? It's smack dab in the middle of the Berkshires. Is there a forest home to talking animals following legends? That forest's in Ontario or somewhere in England. Are you looking for The Leader of a secret den of werewolves? He's enjoying a day of fun at Six Flags Fiesta Texas. Has a Zombie Apocalypse or The Plague broken out? The epicenter is in Sweet Home Alabama. Ultimate Showdown of Ultimate Destiny? Fenway Park has front row seats.

This is sometimes Played for Laughs, though in most cases it rather realistically points out that events do happen in the world outside its largest cities. The trope namer is Doctor Who and subsequent spin-off Torchwood. This is because the revived Doctor Who was produced by BBC Wales. This trope may also happen as a type of Author Appeal, when the author is a native of that location and wants to see it in the spotlight. Such an author may also prefer to write what he knows. Writing about New York City when you don't actually live there risks making the setting generic and cliched, but if you're from Charlotte and know its culture, locales, and history, it can make your story distinctive, as well as informative for outsiders and exciting for locals who will get the references.

Not to be confused with Aliens of London (though this doesn't mean they are mutually exclusive), Nothing Exciting Ever Happens Here (where the location is just generically boring). Contrast with Canada Does Not Exist, where it's forbidden to name the semi-known location, as well as Washington D.C. Invasion, when the aliens don't feel like faffing around and cut right to the chase.