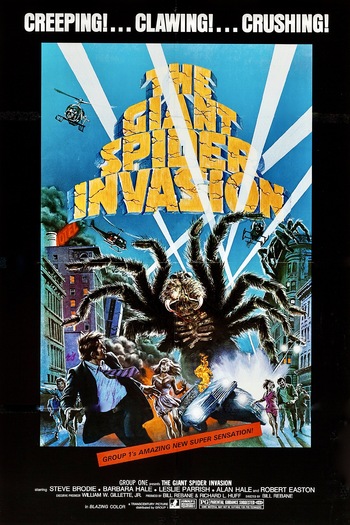 A low-budget 1975 Sci-Fi Horror film directed by Bill Rebane which dares to show that, yes, there are rednecks living well north of the Mason-Dixon line, and no, covering up a Volkswagen with fake fur and sticking legs on it does not make a convincing giant spider.

A meteorite crashes in Merrill, Wisconsin, leaving behind an ominous "wormhole" in the impact crater and a bunch of geodes scattered across a really unappealing farmer's property. Between belittling his alcoholic wife Ev, visiting the local prostitute, and threatening to spank his wife's teenage sister, Dan Kester attempts to sell the extraterrestrial rocks to his equally unappealing cousin Billy, but is miffed when the jeweler informs him that they don't have much value. Dan is distracted from these monetary woes when it turns out that the "geodes" are actually eggs, which hatch to release first a swarm of tarantulas, then badly-made, dog-sized spider puppets, and finally the Volkswagenspinne.

While the assorted arachnids do their best to clean up northern Wisconsin's gene pool, a pair of scientists wander around ineffectually before airdropping a device that manages to close the wormhole and melt the spider-car. There are a couple of B-plots, including a fire-and-brimstone preacher's revival, a missing motorcyclist, and a young couple's quest to find a place to make out, but that's about it.

The movie was filmed primarily on location in the towns of Merrill and Tomahawk, while the spider's rampage at a fair was shot during a Gleason Heritage Days event in Rebane's hometown of Gleason, Wisconsin. The cast is populated by famous has-beens including Alan Hale Jr. as a dumpy sheriff, Barbara Hale as a lady scientist in a pantsuit (sadly not a Hot Scientist), and Steve Brodie as a morbidly obese NASA scientist. Robert Easton, who not only starred as Dan Kester but cowrote the screenplay — aside from being a 60-year acting veteran by the time of his death — was famous for his ability to do two hundred convincing regional accents. He became known as "The Man of a Thousand Voices" and was the best Hollywood dialect coach

.note The only major Hollywood actor he never trained was Meryl Streep. One might wonder why Bill Rebane was able to hire them for his B-Movie — the simple reason was that all of those actors were born-and-bred Wisconsinites who knew Rebane very well, and used the film as a way to visit their families.

Bill Rebane has decided to turn The Giant Spider Invasion into a stage musical, and why not? He hopes it'll have legs.