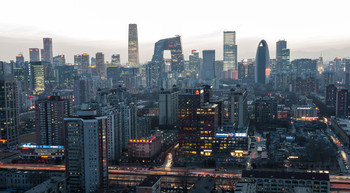 The city from which one-fifth of the world's population has been ruled for centuries. * Image credit to 秋田少年.
Advertisement:

Beijing (北京) or as previously romanized, Peking, is the capital of the People's Republic of China. The name, pronounced like bay-jing and not beige-ing, literally means "Northern Capital". note China has gone through a fair number of capitals in its history. Nanjing means "Southern Capital" and yes, "Eastern Capital" and "Western Capital" also existed for a time in China as well as still existing in Japan (Tokyo ("Eastern Capital") and Kyoto’s alternative name ("Western Capital") It has been the capital of China since Kublai's Yuan dynasty. Often noted for its Peking duck cuisine and traditional residential alleys known as hutong. One of the four municipalities alongside Tianjin, Shanghai and Chongqing.

As the capital city of the world's largest and most powerful unitary state, the actual urban area of Beijing is the political, cultural and economical center of the modern PRC and the Chinese-speaking world in general. For China's ambitious youth north of Yellow River, Beijing offers the best opportunities to advance in their career and thus climb the ladder of social classes. In a few fields such as performing arts, this situation even apply to all of China.

The population of this Mega City is roughly 17.43 million as of 2010, an estimate based on those who have lived there for six months or more. To reside in Beijing and enjoy its full social benefits, you need a residence called "Hukou", which may take years to get. Thus, Beijing is ill-defined, and equating the city proper with the municipality is quite silly. The city's real population continues to grow well past 20 million, despite the high living cost and the infamous smog.note  Contrary to stereotype, it is not persistent in Beijing; people from the neighboring Hebei province would actually be surprised by the frequent blue skies.

Many people don't have the aforementioned permit to reside in Beijing, and thus live in faraway suburban districts within the municipality, but not in the city proper. The municipality is an entity larger than 40 sovereign states and includes rural areas, other county seats and some satellite cities. Even so, urban sprawl has recently pushed the urban area beyond the municipal borders and into Hebei Province.

The central government commonly attempted to control Beijing's overcrowding, with success in the city proper, but with mixed results in the outlying parts of the city. Therefore, the Beijing Municipality has been economically integrated with neighboring areas to prevent districts from decaying into little more than commuter towns. Therefore, an entity that governs over Beijing, Heibei and Tianjin was created, called JingJinJi (named after Beijing, Tianjin, and Hebei's one-character abbreviation, Ji). The Xiong'an New Area was later established in Hebei to serve as a development hub for the JingJinJi economic triangle and offload workloads of the state capital.

Due to Beijing's enormous size, enormous traffic jams are to be expected. Formerly, bicycles were commonly used; so much, actually, that traffic jams occurred in the bicycle lanes, even though they took half the street (hence Katie Melua's song "Nine Million Bicycles"). However, these days the bicycles have been replaced by myriads of cars, bringing lots of air pollution and thick smog with them. note  Beijing's air quality is very bad, being ranked 13th worst in the world by the World Bank. The pollution had the interesting effect of causing the city to fund a truly gargantuan bike-share program and now there are probably more bicycles in Beijing than every before (so many bicycles in fact that the millions of public-use bikes clogging the sidewalks were declared a public nuisance and most of them were confiscated and junked by the government).

To fully comprehend Beijing's size, imagine yourself standing on Tian'anmen square, the center of the city. If you were to walk outwards in any direction, you would reach:

Tens of thousand smaller, county-level cities and county seat townships . have gained convenience, but have also been sucked out of resources and opportunities by Beijing. Thus, they are gradually integrating with Beijing to form a large metropolitan area, connected by everything: from city buses, to high-speed rail. Out of all these cities, the most important ones are:

Similar areas would be Greater London/Moscow/Île-de-France/Seoul Capital Area. However if everything goes well in the eyes of the CPC, and the Beijing-Tianjin-Hebei integration plan is successfully carried out, the resulting conurbation would effortlessly surpass Tokyo-Yokohama as the largest and most populous metropolitan area in the world, dwarfing any other city and having around 50 million people being called "Beijinger".

While there are other metroplexes in China that can easily rival the aforementioned cities, like the Yangtze River Deltanote  Nowadays, Shanghai and its adjacent cities, which have historically been better with their urban and economic development, could easily rival Tokyo's population, most of the cities within the area have rich cultural and political assets that keep their identity fiercely independent. In contrast, inhabitants of the capital region can feel the centrality of Beijing in every aspect of their lives, and while prefecture-level cities such as Tianjin aren't at such a great risk of losing their identity, the Beijing Municipality continues to expand into and assimilate Hebei's counties. And somebody will comment that China has become the Roman Empire and Beijing is Rome itself.

The most famous location in Beijing is Tiananmen Square. The first word translates to “Gate of Heavenly Peace”, and was the name of the gate to the Forbidden City. The square itself was first built in 1651 and was expanded after Mao Zedong and the Chinese Communist Party took power on October 1st 1949, an event still celebrated annually in China. Due to its history, it has a lot of cultural significance. The most notable locations in the square include:

However, those outside of China most likely associate Tianamen Square with the 1989 protests and subsequent crackdown by the Chinese Communist Party. Started in response to the demise of the then popular Hu Yaobong, a former CCP leader that achieved some and sought more reforms to the Chinese Communist Party before being forced out by party hardliners in 1987 and died 2 years later. In the run-up to his funeral, protests started in Tianamen Square and spread through China for the next month and a half note You read correctly, it wasn’t just in Beijing, it was simply the one that got all the attention due to being in China’s capital. After internal power struggles were won by hardliners again, a brutal Crackdown followed on June 4th 1989, with “People’s Liberation Army” forces brutally shooing out all protesters by force. The most famous incident being the Tank Man

who bravely stood in front of and entered a tank as several began entering the square. The crackdowns earned fierce condemnations abroad and still haunts the Chinese Communist Party to this day, as it remains one of most heavily censored topics on the Chinese internet. Even the slightest reference or thing that could be construed to reference the event are subject to strict censorship.

A culturally important city, Beijing recently hosted the 2008 Olympic Games, with most games taking place in the city proper, as well as some in the municipality.note Some events are held elsewhere, even including Hong Kong This provoked massive controversy beforehand, particularly in regards to China's human rights violations and Tibet as well as food safety issues. However, the Games themselves, unlike Moscow in 1980, were largely peaceful. This also helped Beijing win the rights to host the 2022 Winter Olympic Games, making them the first city to host both the Summer and Winter Olympics. However, controversy sparked over the striking similarities between the first official Olympic song

note which is Hilarious in Hindsight as Frozens "Do You Want To Build a Snowman?" has been noted to sound a lot like Yentl's "Papa Can You Hear Me?" before and as mentioned before, gross human rights violations, to the point of drawing diplomatic boycotts from many nations