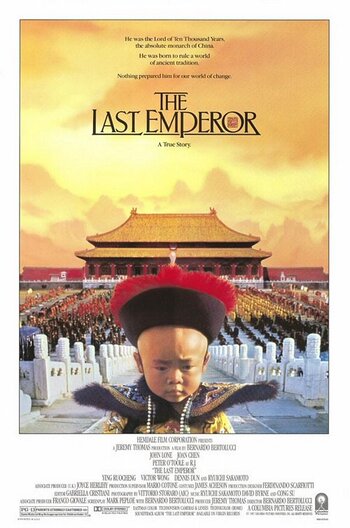 "The Emperor has been a prisoner in his own palace since the day that he was crowned, and has remained a prisoner since he abdicated. But now he's growing up, he may wonder why he's the only person in China who may not walk out of his own front door. I think the Emperor is the loneliest boy on Earth."
— Reginald Johnston
Advertisement:

The story, based on Pu-Yi's autobiography, tells how he ascended to the throne at the age of three. In his brief reign, he was confined to the Forbidden City, not knowing of the world of his people. When he is forced to abdicate at nine, the rest of Pu-Yi's life is one of desolation and impoverishment. After serving as the ruler of a Japanese puppet government of China during World War II, he becomes a political prisoner of the Soviets and then of the Communist Chinese. When finally released in the 1960s, Pu-Yi dies in obscurity.

This film proved very successful at the Academy Awards, winning all nine of its nominations, including Best Picture, tying the record set by Gigi nearly thirty years earlier.

Not to be confused with The Last Empress.