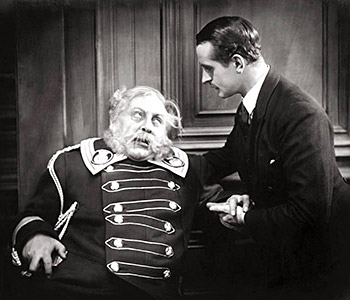 The Last Laugh (Der letzte Mann) is a 1924 German Silent Movie directed by F.W. Murnau. Emil Jannings, who later won the first Academy Award for Best Actor, plays a doorman at a fancy Berlin hotel. The doorman takes great pride in his job, in the hotel, and in the fancy uniform that he gets to wear. However, he is old for a doorman, and one day he comes to work and finds out that another employee has been given his job. The former doorman is demoted to washroom attendant. Humiliated, he tries to conceal this from his neighbors and family.

Has a place on the Roger Ebert Great Movies List. Ebert's review is here

Compare A Page of Madness, a Japanese silent film made two years later that also did without title cards.