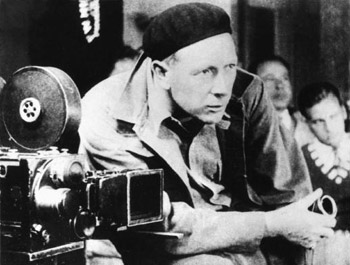 Friedrich Wilhelm Murnau (born Friedrich Wilhelm Plumpe; December 28, 1888 – March 11, 1931), commonly known as F. W. Murnau, is one of the pioneers of film history, and one of the greatest directors of the silent film era. Born in Germany, Murnau fought in the trenches of World War I before joining the German Air Force, where he fought in the air before accidentally landing in Switzerland and being interned.

Almost immediately after the war ended he went to work in the German film industry, directing his first feature-length film in 1919. Murnau became world-famous with his 1922 vampire film Nosferatu, which invented the idea that vampires die in sunlight. His 1924 triumph The Last Laugh was a masterpiece in the art of communicating visually, with less reliance on broad gestures and As You Know intertitles. In fact, the film has no intertitles.note  Well, actually, it has one intertitle, but that's used for a Breaking the Fourth Wall message from the director to the audience.. Murnau's films throughout his career used far fewer title cards or written exposition than any other filmmaker of the silent era.

After enjoying another triumph with his adaptation of Faust, Murnau was brought to America by William Fox of Fox Studios (which later became 20th Century Fox). The result was Sunrise, a lyrical tale of a husband and wife repairing their broken marriage which is still hailed as one of the best silent films ever made. His next films, 4 Devils (now lost) and City Girl were taken from him and Re-Cut by the studios, with talking scenes added as Hollywood was transitioning to sound. Murnau, who had no interest in talking films, proceeded to spend his own money to make another silent, Tabu. He probably would have knuckled under like everyone else did and make talkies, but he never got the chance. He was killed in a car accident in 1931 just a few days before Tabu premiered.

Despite his death at 42 he left behind a body of work that makes him one of the greatest film-makers of the 20th Century. The lack of sound meant that silent films tended to be handicapped from developing complex, psychological, adult narratives of the kind that came easily to novels and plays. They by and large featured simple stories and the gesture dependent and overly expressive acting styles put a damper on attempts at realism. Murnau was one of the first to try and solve this dilemma, by using cinematic techniques of camera placement, camera movement and lighting to suggest character complexity and a portrait of society. He also pioneered the Tracking Shot in these films. Both Sunrise and Tabu won Oscars for Best Cinematography.

Murnau was among the first directors to shoot on location and kept moving to realism. Even Nosferatu by and large was shot on real locations. His films influenced several directors around the world, including Alfred Hitchcock and John Ford.

John Malkovich plays him in the 2000 film Shadow of the Vampire, which dramatizes the production of Nosferatu (albeit with liberties).