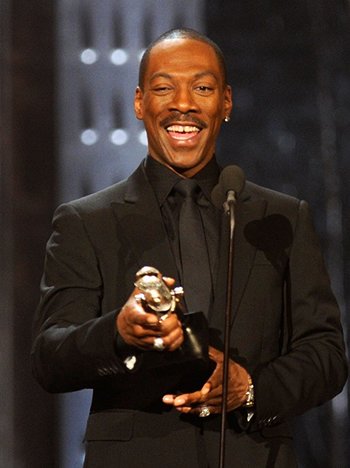 Dishonor on you! Dishonor on your cow!
"That was really amazing to me that he would have that power. To stand in front of a group of people and say: 'This is what I think is funny and I'm gonna make you laugh.' and do it."
— Charlie Murphy on his younger brother Eddie.
Advertisement:

Edward Regan Murphy (born April 3, 1961) is an American actor, voice actor, film director, producer, comedian and singer. He is the second-highest grossing lead actor in motion picture history. He was a regular cast member on Saturday Night Live from 1980 to 1984 — keeping that show afloat at a time when it was floundering so badly that NBC was considering cancellation note At the time, Eddie Murphy was SNL's youngest cast member to join at the age of 19. He was beaten by Anthony Michael Hall — who was 17 years old — when Hall joined the cast in 1985. Murphy is still considered the youngest black male cast member to join the cast, despite the upset — and worked as a stand-up comedian throughout The '80s. He was ranked #10 on Comedy Central's list of the 100 Greatest Stand-ups of All Time.

On Saturday Night Live, he's known for appearing with Joe Piscopo in a lot of sketches (to the point that the cast members and fans thought they were stealing the spotlight during their time on the show), his recurring characters Mr. Robinson (a poor, black, urban take on Mister Rogers' Neighborhood note Notably one of the only parodies of his show which Fred Rogers was said to have personally enjoyed, as he not only knew that it was sincere but didn't worry about children mistaking Murphy's parody for the real thing., who first appeared on the Jean Doumanian episode that gave NBC a reason to kick her off the shownote you know, the one where Charles Rocket casually says, "I'd like to know who the fuck did it," after being shot during a sketch, but didn't become popular until Dick Ebersol took over), Buckwheat from The Little Rascals (whose character was assassinated, then brought back from the dead), Dion (a Camp Gay hairstylist), Angry Black Man Raheem Abdul Mohammed, poetic prisoner Tyrone Green, sleazy salesman Velvet Jones (the "I Wanna Be a Ho" Guide), and Gumby as an old, Jewish man. His celebrity impressions, though small, included Bill Cosbynote with whom he had a rivalry with, until Cosby's history of sexual assault and misconduct ruined his reputation, as mentioned when Eddie Murphy came back to host in season 45 and gloated in Cosby's voice, "Who is America's Dad now!", James Brown (the singer, not the football commentator), the Reverend Jesse Jackson, Mr. T, Jerry Lewis (in a Two Faces of Eve film parody with Joe Piscopo as the older, embittered Vegas hanger-on take on Lewis while Murphy played the loud, bucktoothed, childish moron version of him), and Stevie Wonder.

Eddie Murphy is also the first (and, so far, only) Saturday Night Live cast member to host the show while still a cast member (making him the only cast member to have the shortest time between being a cast member and hosting an episode, beating Chevy Chase, who left the show in the middle of season two and came back to host in season 3), a decision that has been cited by the cast at the time as a low point for the show and a sign that Dick Ebersol cared more about making Eddie Murphy and Joe Piscopo popular rather than give the other cast members (Gary Kroeger, a pre-Seinfeld Julia Louis-Dreyfus, Mary Gross, Tim Kazurinsky, and Brad Hall) a chance at being funny.

In 1983, he took the world of stand-up comedy by storm with his special Delirious, earning him the title of "the first rock star comedian." It continues to be memetically popular with the new generation, featuring memorable sketches such as his drunk foul-mouthed dad, his shoe-throwing mom, his overweight moustached Aunt Bonnie who fell down the stairs (My Shoe!) and is rumored to be Bigfoot (GOONIE GOO GOO!), portraying Mr. T and Ralph Kramden as homosexuals, portraying Michael Jackson as a very sensitive young man, discussing offended African-Americans on his portrayal of Stevie Wonder and much much more.

Amongst his Eighties film roles,note all of them at Paramount Pictures, with whom he had an exclusive contract he was best-known for playing Axel Foley in the Beverly Hills Cop series; he also helped popularize Salt and Pepper pairings with his work in 48 Hrs. (his film debut) and Trading Places. In 2007, he won the Golden Globe for Best Supporting Actor for playing soul singer James "Thunder" Early in Dreamgirls, a role which also received a nomination for the Academy Award for Best Supporting Actor.

In case you can't tell yet, Murphy was absolutely huge in the '80s. He even scored a chart-topping pop hit with "Party All the Time" in 1985; people bought the (notably bland) song entirely because it was Murphy and Rick James. The song even appears in the soundtrack to (of all things) Grand Theft Auto V. Murphy continued his music career to diminishing returns into The '90s, culminating in a duet with Jackson which is far less awesome than it sounds. Many of his later film roles have also incorporated his singing ability.

After voicing Mushu the dragon in Disney's Mulan, Murphy's work as a voice actor went on to include Thurgood Stubbs in The PJs and Donkey in the Shrek series.

His brother Charlie was an accomplished stand-up comedian in his own right, and had a steady acting career of his own; having been a regular on Chappelle's Show, played Ed Wuncler III in The Boondocks, and had a regular role as Vic Hargrove in Black Jesus. He even appeared in a cameo as himself in a segment from 1000 Ways to Die. Sadly, he died from leukemia on April 12, 2017.

Unfortunately, as the 1990s and 2000s rolled around, Eddie's career became notorious for alternating significant hits (The Nutty Professor and the Shrek movies in particular) with embarrassing bombs, hitting rock bottom when The Adventures of Pluto Nash became one of the all-time biggest flops, with a budget of $100 million dollars and a worldwide gross of $7.1 million. He had a brief resurgence of quality with Dreamgirls (earning him an Oscar nomination for Best Supporting Actor), but he has yet to have a hit film since then. However, in 2019 he drew raves for his performance in the Rudy Ray Moore biopic Dolemite Is My Name and his return to Saturday Night Live as a guest host for the Season 45 Christmas Episode, and is planning a return to the stand-up circuit.

His roles provide examples of: