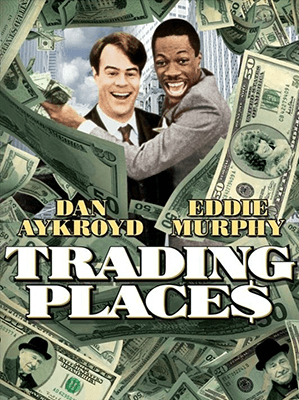 "It occurs to me that the best way to hurt rich people is by turning them into poor people."
— Billy Ray Valentine
Advertisement:

Louis Winthorpe III (Aykroyd), a privileged commodities broker in Philadelphia, has a nearly-perfect life: he lives in a big house owned by his rich employers, has a beautiful rich fiancée, and exclusive country club memberships. During the opening minutes of the film, Winthorpe runs afoul of supposedly homeless con man Billy Ray Valentine (Murphy), and an unfortunate mixup gets Valentine arrested for trying to steal Winthorpe's briefcase.

Winthorpe's bosses, financial tycoons Randolph and Mortimer Duke (Ralph Bellamy and Don Ameche), debate "nature vs. nurture" after witnessing Valentine's arrest. Mortimer believes good breeding makes a man a success, no matter how much opportunity the world provides to him, while Randolph believes a rich man will deteriorate and a poor man will succeed if placed in the right environment. The Dukes decide to run a social experiment by ruining a rich man's life, putting a poor man in the rich man's place, and seeing what happens. Winthorpe and Valentine become the Dukes' "test subjects", and the brothers make a bet on the outcome for "the usual amount".

The Dukes frame Winthorpe for embezzlement and possession of drugs and use a hooker named Ophelia (Curtis) to further humiliate him in front of his fiancée; Winthorpe loses his job, his house, and his fiancée in short order, and he ends up living with Ophelia, who takes pity on him. After ruining Winthorpe's life, the Dukes arrange for Valentine's release from jail, then give him Winthorpe's job and house. Randolph's prediction comes true: Winthorpe's life spirals out of control while Valentine becomes a success (even though he gains some of the same attitudes against the poor that Winthorpe held).

Valentine eventually finds out about the experiment as well as the brothers' plans to undo all the success he's been having just for their own amusement, then befriends Winthorpe in order to turn the tables on the Dukes. The duo plans appropriate revenge involving a frozen-concentrated-orange-juice crop report, a train to New York, a commodities exchange floor, and the help of Ophelia and Winthorpe/Valentine's butler, Coleman.

The Duke Brothers do not react well to defeat... especially since they've lost their entire fortune.

The Duke Brothers do not react well to defeat... especially since they've lost their entire fortune.