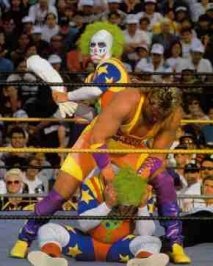 A second Doink (Steve Keirn) helps out the first Doink (Matt Borne) against Crush at WrestleMania IX
"And then I look at their little smiles... and I like to just take those smiles right away. A-ha-ha-ha."
—Doink the Clown, WWF Superstars, January 9, 1993

Doink the Clown is a Professional Wrestling gimmick that first appeared in WWE in late 1992 and lasted into 1995. He started out as a vicious Heel played by veteran "Maniac" Matt Borne. The second Doink, also evil, was played by veteran Steve Keirn, who had last been seen as Skinner. Sometime after Doink's first PPV loss, to Bret "The Hitman" Hart by DQ at SummerSlam 1993, the gimmick started becoming popular. Borne left in October 1993 due to drug/alcohol problems, and was replaced. Doink was turned face around this time, with first Steve "Brooklyn Brawler" Lombardi and then Ray Licachelli (a.k.a. Ray Apollo or Gary Fall) taking on the gimmick full time. The face turn, complete with a guy playing Santa Claus giving Doink his midget wrestler Sidekick Dink, is generally acknowledged as the moment that killed off everything that had made Doink so effective. That said Doink would still occasionally appear in house shows played by various wrestlers. The final WWE wrestler to play Doink would be Nick Dinsmore (later known as Eugene) who played him in a Royal Rumble appearance as well as a match with Chris Benoit.

The Doink persona would also be used in the WWE by various wrestlers such as Chris Jericho and Jeff Jarrett for various storyline reasons.

Matt Osborne, the man behind the original Doink the Clown was found dead on June 28th 2013 due to an accidental overdose of morphine and hydrocodone.