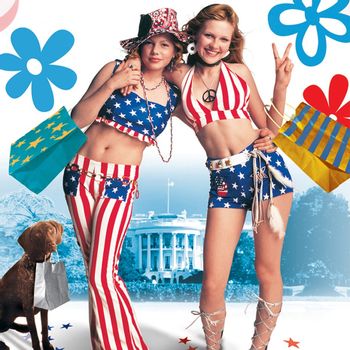 "In case you couldn't tell, (Tina Armstrong's) an American, and Americans always wear the stars and stripes. In fact, I'm wearing a very patriotic thong."
— Bandit Keith on The Spoony Experiment review

of DOA: Dead or Alive
Advertisement:

A flag design on swimwear, or similar garment, apparently to make the outfit even sexier, or at least very distinctive.

For some reason, the U.S. flag seems to be the most common, but it's not the only one.

It often shows up in advertising, particularly if being worn by a Hood Ornament Hottie.

Some people consider this disrespectful to these flags (and Brazil actually bans its flag on swimsuits note United States flag code forbids using the flag as part of any apparel as well, but while technically part of the law, the flag code has no punishment for violations, making it more about respect than law. Note this applies only to using an actual flag as clothing and not clothing with the flag printed on it as a pattern.), while other people don't seem to mind, as shown by the popularity of this kind of suit.

If an anime or manga has a Gorgeous Gaijin fanservice girl from the United States, and there is a Beach Episode, expect said girl to wear this bikini.

A Sub-Trope of Patriotic Fervor, Wearing a Flag on Your Head, and Sexy Whatever Outfit. Needless to say, Truth in Television. Not to be confused with Underwear Flag.