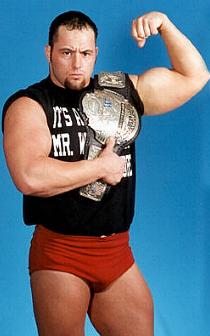 Nick Dinsmore (b. 1975) is an American Professional Wrestler and trainer from Jeffersonville, IN best known for his work in WWE from 2004-2007 as Eugene. Dinsmore debuted in 1997 in the USWA in Memphis. When that closed, he jumped to Music City Wrestling in Nashville, where he formed the tag team Limited Edition with Rob Conway. They would hold the NWA MCW North American Tag Team Titles

until they had to vacate due to Dinsmore being injured. Dinsmore went on to OVW, where he was both a very successful wrestler, holding the OVW Heavyweight Title

11 times, and a trainer, working with, among others, Randy Orton. He also wrestled for the Heartland Wrestling Association, holding the HWA Heavyweight Title

for a little over a week in August 2001. He made his PPV debut as the Doink the Clown in the "APA Invitational Bar Room Brawl" at WWE Vengeance 2003. He debuted in WWE as "Eugene" in 2004, with a gimmick of Raw General Manager Eric Bischoff's "wrestling savant" nephew, who Bischoff instructed William Regal to "train" and generally look after. Eugene and Regal would have one run with the WWE World Tag Team Titles

. Dinsmore was released in 2007 and would go on to compete for a variety of promotions. He was previously a trainer for WWE NXT until he was released again in 2014. Dinsmore is currently active in the independent scene.

"It's all about Mr. Wrestling's Tropes":