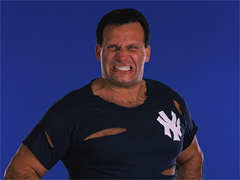 Steve Lombardi (b. 1961) is an American Professional Wrestler and official from Brooklyn, NY best known for his time in WWE from the 1980s to 2016, particularly under the name The Brooklyn Brawler. He started his career in 1983 and was a Jobber for years. In 1989, he was repackaged as a Heel as the Brawler, as manager Bobby "The Brain" Heenan's revenge against the Red Rooster having turned face and left the Heenan Family. The gimmick stayed with him after the feud ended. In 1992, he was Kim Chee, the handler for Kamala, until he turned face and sided with Reverend Slick. After Matt Borne left WWE, he became the first Face version of Doink the Clown. When the Baseball strike hit in mid-1994, he was turned into MVP, renamed Abe "Knuckleball" Schwartz. He has also worked as a referee and as a backstage official for years. He has also competed for many independent promotions. He made his PPV in-ring debut as Kim Chee in the Gimmick Battle Royal at WrestleMania X-7 in 2001. Among his in-ring achievements, he is a former NWA Michigan Heavyweight Champion

and, on the July 6, (taped July 4) 2000 WWE SmackDown!, actually pinned TRIPLE H in a handicap match where he teamed with Kaientai following Chris Jericho's interference.