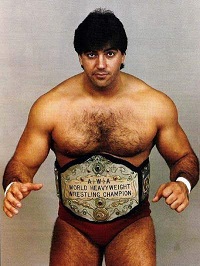 Richard Vigneault (born March 18, 1956) is a retired Canadian Professional Wrestler who competed from the 1970s through the 1990s as Rick Martel. He started in his native Quebec and competed for WWE, the AWA, various National Wrestling Alliance territories, All Japan Pro Wrestling, various other territories and independents before he had a short-lived comeback in WCW in 1997-1998. He made his PPV debut at WrestleMania III teaming with Tom Zenk as The Can-Am Connection in a win over "Cowboy" Bob Orton Jr. and Don Muraco. Among his in-ring achievements, he was a former AWA World Heavyweight Champion, a former 3x WWE World Tag Team Champion

. He retired in 1998 due to accumulated injuries.

He was in no way related to "Sensational" Sherri Martel, even though the two of them were involved in a storyline in the WWF.

"The tropes of success":