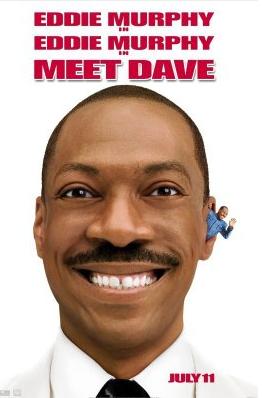 Meet Dave is a movie released in 2008, about a human-sized spaceship crewed by tiny aliens from a planet called Nil. It stars Eddie Murphy in two roles: the spaceship, which comes to be known as Dave Ming Chang, and the ship's captain, known only as Captain.

The aliens come to Earth because Nil is facing imminent doom for want of salt, and they aim to solve this problem with a golf ball-sized orb that will extract all the salt from Earth's ocean. Unfortunately, the orb is knocked off course during its entry into Earth's atmosphere, so the aliens must search New York City to find it. During the search, Dave meets a young boy, Josh, who recently had the orb in his possession, and Josh's attractive single mother, Gina (Elizabeth Banks). More than a few complications occur (along with a good deal of laughs) as the Captain gets to know Earth's people in general, and Gina in particular (with whom he becomes rather smitten).

The film's credited writers are Bill Corbett of Mystery Science Theater 3000 and RiffTrax and Rob Greenberg of Frasier and How I Met Your Mother. Corbett has gone on record as saying that the final film differs radically from the last draft they wrote.