Film / Dolemite Is My Name 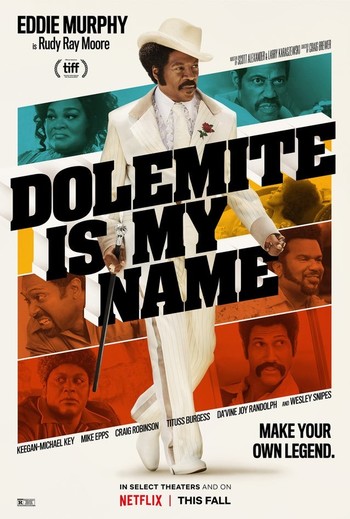 Dolemite is My Name is a 2019 comedic biopic directed by Craig Brewer and written by Scott Alexander and Larry Karaszewski. It stars Eddie Murphy as Rudy Ray Moore, the comedian and rapper who broke out into the world of blaxploitation with his character of Dolemite, a fast-talking, Kung Fu fighting pimp.

The movie depicts a Dramatizatied version of Moore's early career, starting in 1970s Los Angeles, where Moore is a struggling stand-up comedian and singer, who works in a record store to make ends meet and tries to get his music on the air in the in-store radio station. But one day, a homeless man named Ricco (Ron Cephas Jones) comes wandering into the record when Moore is working his shift, and proceeds to speak in rhymes as he tells stories of a pimp called "Dolemite". Intrigued by this, Moore plies Ricco with cash and booze for more and more tall tales and eventually gets the idea to create a stage persona telling these stories as a part of his stand-up routine. Dressing in colorful pimp attire and brandishing a cane, Moore takes the stage at the club under the persona of Dolemite, to great reception by the audience, and thus begins Moore's career in showbiz in earnest as he sets out in the attempt to prove his naysayers wrong.

The movie also stars Wesley Snipes, Keegan-Michael Key, Craig Robinson, Tituss Burgess, Mike Epps, and Da Vine Joy Randolph. It was released on Netflix on October 25 after a brief run in theaters. The trailer can be seen here

Tropes Associated With Dolemite is My Name include: