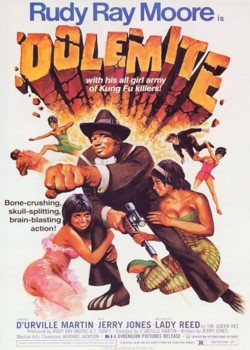 Dolemite is a 1975 blaxploitation feature film, following the titular character, played by Rudy Ray Moore, who co-wrote the film and its soundtrack. The film was directed by D'Urville Martin and distributed by Dimension Pictures Inc.. A sequel film, The Human Tornado, was later produced.

The film follows Dolemite, initially jailed due to being framed by crooked cops hired by his rival, Willie Green. The film opens to the prison warden calling Dolemite up to his office and offering him his freedom if he can help gather evidence supporting the theory that he didn't commit the crime. Dolemite returns to his life as a pimp and is harassed by the cops who framed him, the movie proceeds to follow a nonsensical and convoluted plot that amounts to little.

The 2019 Netflix film Dolemite Is My Name is a fictionalized depiction of Moore's life and his creation of the first Dolemite movie, with Eddie Murphy playing Moore.