I Can't Feel My Legs! 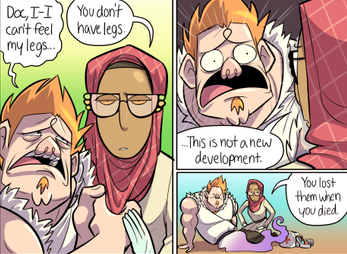 That's not new either.
Dwight Hartman: I... I can't feel my legs!
Ray Wilkins: Dude... you never could.
— Scary Movie 2, after the paraplegic Hartman has fallen out a window
Advertisement:

A big battle is going on, and one of the good guys gets injured. Usually, it's not a main character, but rather a secondary one who utters the phrase "I can't feel my legs...". When this comes out of their mouth, you know that they're going to end up paralyzed in some way (usually for life). This is a common backstory for the Inspirationally Disadvantaged, Wheelchair Woobie, or someone with a Disability Superpower.

This trope is usually a spoiler, as well as a Stock Phrase.

This trope is Played for Laughs a lot nowadays, sometimes with the character saying "I can't feel my legs" already being disabled, and somebody reminding them that they couldn't before. Alternatively they may say the words, then a few seconds later realise that they can, and it's agonising. Another variant is the person thinking they're touching their own legs with their hands, getting worried when it doesn't cause a feeling in their legs, then being told they're touching something else (usually someone else's legs). For a related comedic trope, where this situation is Played For Slapstick, see Bits of Me Keep Passing Out.

I can't feel my legs!

Olaf, those are Kristoff's legs.

I can't feel my legs!

Olaf, those are Kristoff's legs.