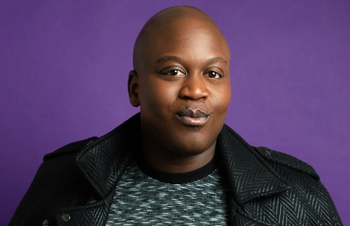 Tituss Burgess (born 1979 in Athens, Georgia) is an American stage-and-screen actor. He started out in theater and became known for his high tenor voice. On television, he had minor roles on multiple shows (notably on 30 Rock) before being cast as Titus Andromedon on Unbreakable Kimmy Schmidt, which was critically acclaimed. He has also done some voice acting, such as in The Angry Birds Movie and The Addams Family (2019).

Tropes applying to his body of work: