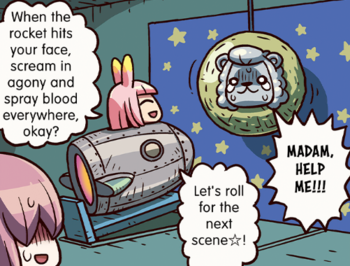 You decide to make your own movie, so you do whatever you can to get a video camera, convince some of your friends to be the actors, and buy props to make the movie more believable. However, your movie project hits a few snags in the filming process, so Hilarity Ensues; the actors forget their lines or screw up their parts, props are always falling over at inopportune times, the equipment is clearly visible while filming, etc. It turns out that making a movie isn't as easy as it looks at all.

Expect to see loads and loads of Special Effects Failure, though the final product often ends up So Bad, It's Good. Closely associated with an Amateur Film-Making Plot.