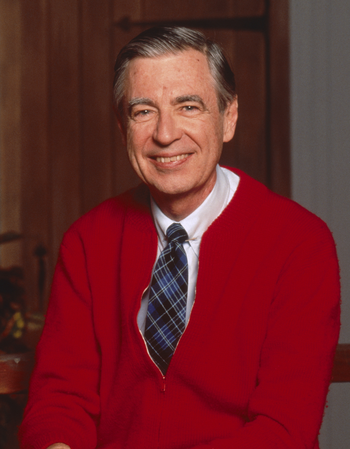 Hello, neighbor.
"When I was a boy and I would see scary things in the news, my mother would say to me, 'Look for the helpers. You will always find people who are helping.'"
Advertisement:

Rogers received over 40 honorary degrees and several awards, including the Presidential Medal of Freedom in 2002 and a Lifetime Achievement Emmy in 1997, and was inducted into the Television Hall of Fame in 1999. He influenced many writers and producers of children's television shows, and served as a source of comfort during tragic events, even nearly two decades after his death. He eventually retired from his program at the end of August 2001.

After suffering from chronic stomach pains for a long time, Rogers was diagnosed with stomach cancer in October 2002, and he eventually died from complications related to the disease on February 27, 2003.

Works about Fred Rogers:note See this page for references to Mister Rogers' Neighborhood itself

These tropes like you just the way you are: