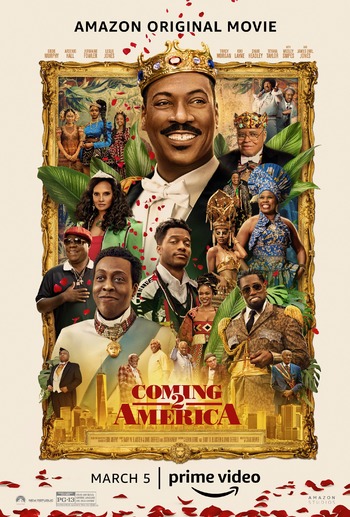 A sequel is in the heir.
Akeem: Prepare the royal jet. We are going back to America!
Semmi: Oh hell no, Your Majesty!
Advertisement:

Coming 2 America is a 2021 comedy film and the long-awaited sequel to 1988's Coming to America. Eddie Murphy and Arsenio Hall reprise their roles as Prince Akeem Joffer and Semmi from the first film. The sequel is directed by Craig Brewer, who also worked with Murphy on Dolemite Is My Name.

When Akeem discovers he has a son named Lavelle (Jermaine Fowler) in America who he never knew about, he and his long-suffering best friend, Semmi, embark on another trip to the States to bring him home so Akeem can groom Lavelle to one day take his father's place as ruler of Zamunda.

Also reprising their roles from the first film are Shari Headley as Akeem's love interest turned Queen, Lisa McDowell; John Amos as Lisa's father and Akeem's former employer; and James Earl Jones as King Jaffe Joffer. New to the cast are Leslie Jones as Lavelle's mother; Tracy Morgan as Lavelle's uncle; KiKi Layne as Akeem and Lisa's eldest daughter; and Wesley Snipes as General Izzi, the older brother of Akeem's former bride-to-be Imani Izzi, and who also has plans to claim the throne for himself.

Originally intended to be released theatrically by Paramount Pictures, distribution rights were sold to Amazon Studios due to the COVID-19 pandemic. The film was released on March 5, 2021.