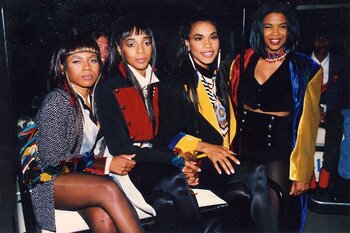 The original lineup: Terry Ellis, Cindy Herron, Dawn Robinson and Maxine Jones
Free your mind,
And the rest will follow,
Be color-blind,
Don't be so shallow!
— "Free Your Mind"
Advertisement:

En Vogue are an R&B group, formed in 1989 in Oakland, California. The original lineup was comprised of four singers, Terry Ellis, Dawn Robinson, Cindy Herron, and Maxine Jones. Often considered one of the best female vocal groups of all time, they made their debut in 1990 with Born to Sing, which spawned the hit single "Hold On", which peaked at no. 2 on the Billboard Hot 100.

This group has examples of: