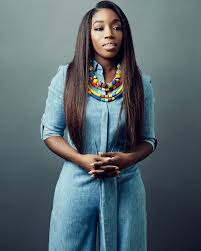 She's not your substitute lover
Advertisement:

Estelle Fanta Swaray (Born January, 18, 1980) is a British singer, songwriter, actor and rapper. Her best known song is her Kanye West duet "American Boy", which reached platinum in several countries. As of 2013, she is also well-known for her role as Garnet on Steven Universe.