Music / Entertainment for the Braindead 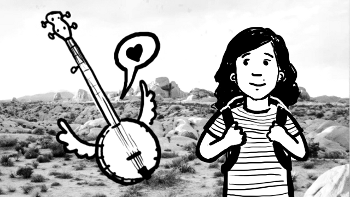 "Yes, yes. My favourite best friend has five strings and a beautiful voice."

Entertainment for the Braindead is the stage name of Julia Kotowski, an independent musician from Cologne, Germany. She plays folk music, some of it lo-fi Three Chords and the Truth music, and some of it more ornate stuff featuring guitar, ukelele, recorder, concertina, and vocal harmonies—Julia refers to it all by the joking title "acoustic dilettante post-something".

All her music has been released under a Creative Commons license. As a result, between the fan-run site

, and the Internet Archive

, all the music can be downloaded for free.